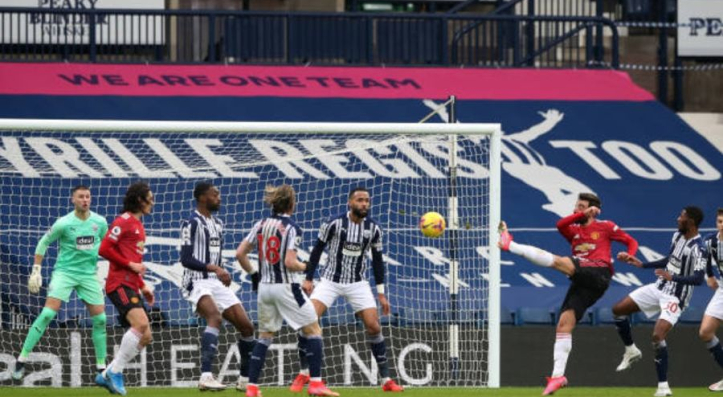 Manchester United’s Premier League title bid was effectively ended as a stubborn West Bromich Albion side held them to a 1-1 draw at the Hawthorns. The dangerous Mbaye Diagne scored early before an excellent Bruno Fernandes volley levelled things up just before the break. But overall is it wasn’t good enough from Ole Solskjaer’s side who underperformed once again against weaker opposition. WBA 1-1 Man Utd: Player Ratings, Match Stats, Player Stats✔️ GOOD PERFORMANCEMbaye Diagne: 7.1The forward gave United’s defenders a difficult afternoon throughout, with his physical presence proving simply too much for Victor Lindelof, particularly on the opening goal. He was able to outmuscle the Swede in the air to move across him and smash his header into the net. In the second half he also bullied Harry Maguire, forcing a mistake and a great double save form David De Gea. He has provided the Baggies with a clear central focus and a few more performances like this could allow them to get some points on the board in their battle against the drop. And yet, he could have won it, blazing over the crossbar in the closing moments.❌ BAD PERFORMANCEEdinson Cavani: 5.3Cavani seems to be a sure starter at the moment but this was one of those displays where the game completely passed him by. Granted the delivery into him, particularly from wide areas, gave him precious little to work with, but he found it extremely difficult to have any kind of impact on the game whatsoever. The Uruguayan managed just 20 touches, and no shots in a performance that everyone will be happy to forget. ⭐ STAR MANBruno Fernandes: 7.5This was far from a vintage display from any of Manchester United’s attacking players, with WBA proving stubborn to break down, but Fernandes did at least produce a moment of brilliance. His left-footed volley, which admittedly hit his shin on the way in, was the one piece of quality in the final third that United produced and it was only enough to earn them a point. Fernandes was largely quiet aside from this, but his ability to make something out of nothing has bailed United out more than once. WBA 1-1 Man Utd: Player Ratings, Match Stats, Player Stats